Your products are unique and fantastic . Comfortable beyond words.

My son didn’t like the drawstring and how the shorts wouldn’t stay up without tying it. He’s 26. Great fabric though!

It’s become one of my favorite hoodies. I usually put it on after a workout. A Guide to Surfing Terminology

We've been talking a lot about surfing lately at Farm Brand: How to choose your first surfboard, how to understand surfboards, surfing guides.

And that's because surfing is one of the most pure forms of enjoyment available in this world.

Sharing things about surfing means the chance to change someone's life by helping to push them to surf for the first time, so we are stoked to not only provide to you the activewear clothing that goes hand in hand with this lifestyle, but also continue curating the information needed to make your surfing journey as successful and fun as possible. 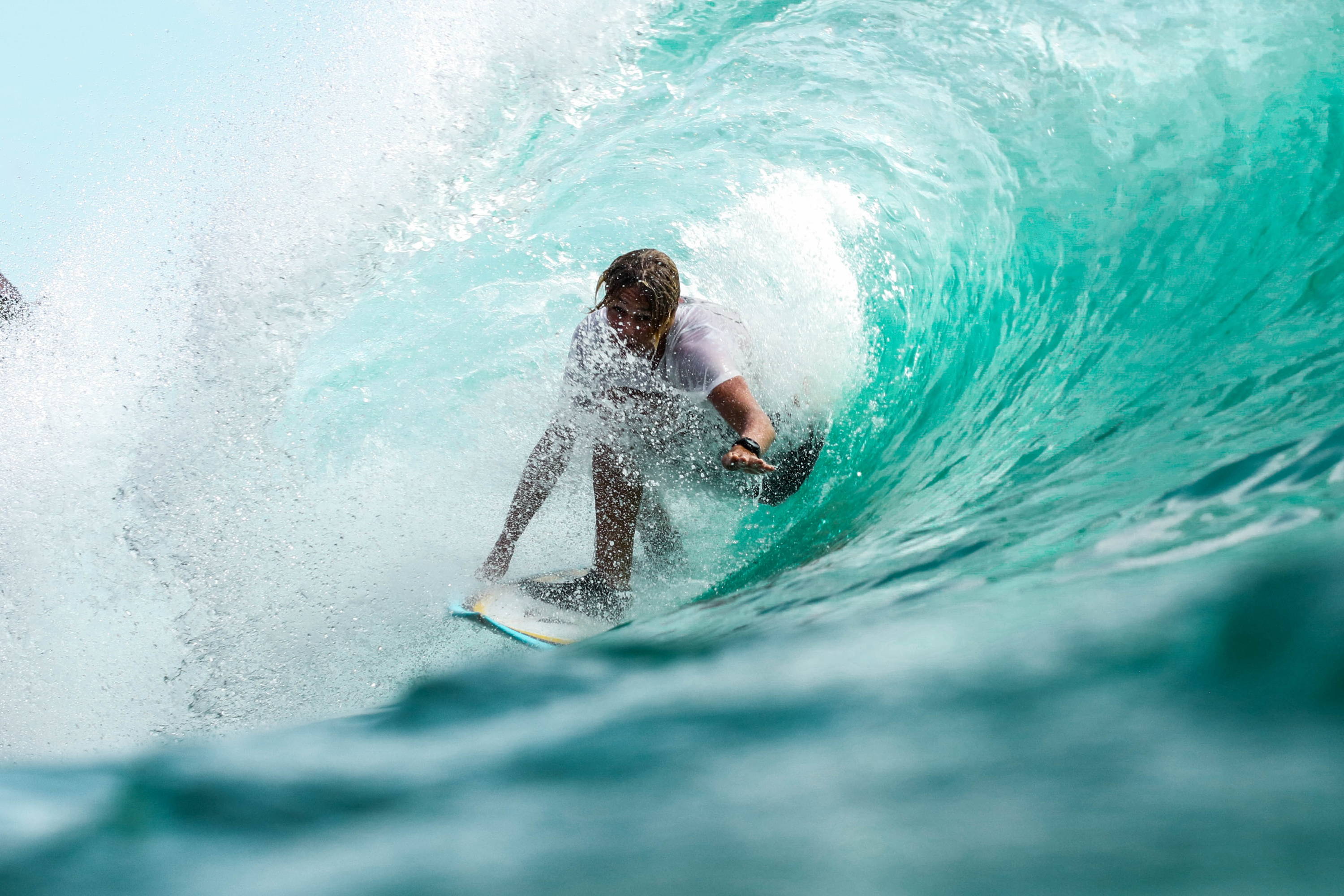 If you haven't realized by now, you are surely soon to find out. There's an entire world of surfing terminology out there, and understanding the different words, terms, and statements is an integrated part of learning how to surf and the journey of a beginner surfer.

Some things are simple slang, conversational ways of which surfers communicate that has become a language of its own, crafted through the culture of surfing. And some, some are technical, words and phrases that describe the ocean, the waves, and other essential pieces of information needed before and as you surf.

We decided to go through each and every one of these surfer phrases so that nothing goes unknown to you, because information is a beginner surfers best friend.

So let's get into the language surfing with the Farm Brand ultimate surfer’s glossary! 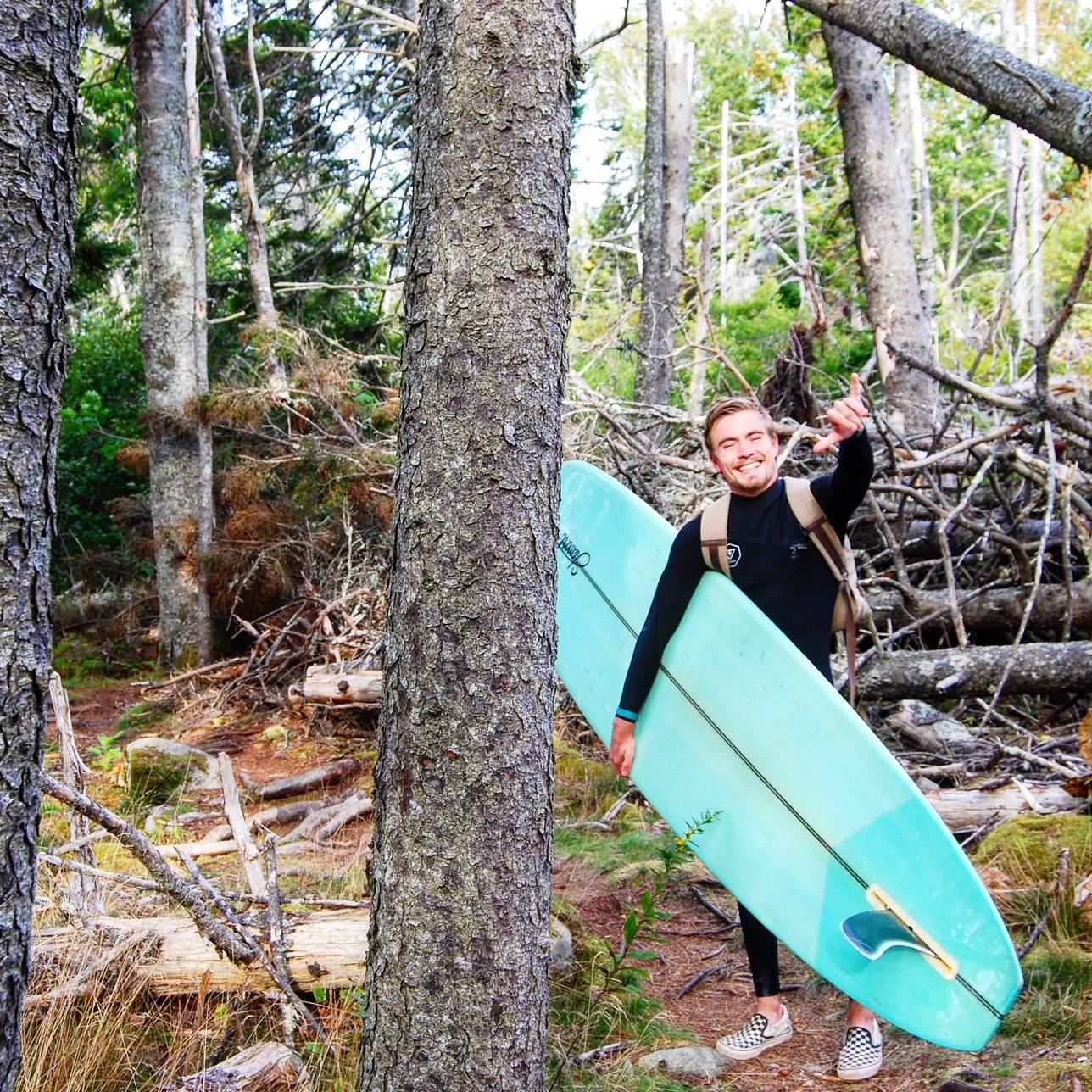 A-frame: a wave that breaks from a point within the middle of the wave. The wave face opens up both left and right, allowing two surfers to surf in different directions at the same time.

Asymmetrical Surfboard: a special kind of surfboard shaped with different, asymmetrical sides. Although a somewhat newly explored concept, this allows even water flow around a surfboard during turns for a precise sharpness and speed.

Aggro: a surfer who is aggressive in either the way they surf or their personality in the water.

Air: When a surfer brings his/her surfboard out of the water, usually above the lip of the wave, landing back into the open face to continue riding.

Air Reverse: a popular arial trick of which a surfer jumps off the lip of the wave to perform a 360 degree rotation.

Ankle Biters: Extremely small, sometimes unrideable, waves, usually reserved for longboarding. The term is derived from the waves being so small that they break over your ankles as you ride.

Barrel(ed): The hollow portion of a wave shaped like a tube, and also the act of a surfer riding under the breaking lip of the wave, inside of the barrel, to continue out of it onto the open face.

Beach Break: A type of wave that breaks over a sandbar. These waves are usually the safest and best for a beginner surfer to learn on.

Bomb: A huge wave, a term to describe a wave that is characteristically larger than the other waves during that day.

Backdoor: Entering a barrel from the back side of its breaking lip.

Bottom Turn: One of the most essential and fundamental forms of a turn on a wave. This turn is the ‘set up’ surf for all other tricks. The surfer performs a large turn from the bottom portion of the wave, shaped like a ‘U’, to provide speed into the lip of the wave.

Carve: a term to describe any sharp, fast, or elegant turn on a wave.

Cutback: A turn where the surfer speeds far past the breaking whitewater, into the shoulder of the wave, cutting back their direction to project themselves into the powerful portion of the wave.

Crest: The highest point of a wave

Caught on the Inside: When you become stuck paddling in the portion of the ocean where the waves are breaking, known as the impact zone.

Charge: To surf without fear and to surf huge waves.

Charger: Someone known for surfing without fear and who pushes the limits of surfing.

Clean: When the waves conditions are nice, peeling, and unaffected by bad winds.

Crispy: A way to describe a trick that was performed well and with style.

Closeout: When the entire face of a wave breaks at the same time.

Curl: The curling lip of the wave, the shape the wave makes when it breaks. Surfers become barreled by surfing under the curl. 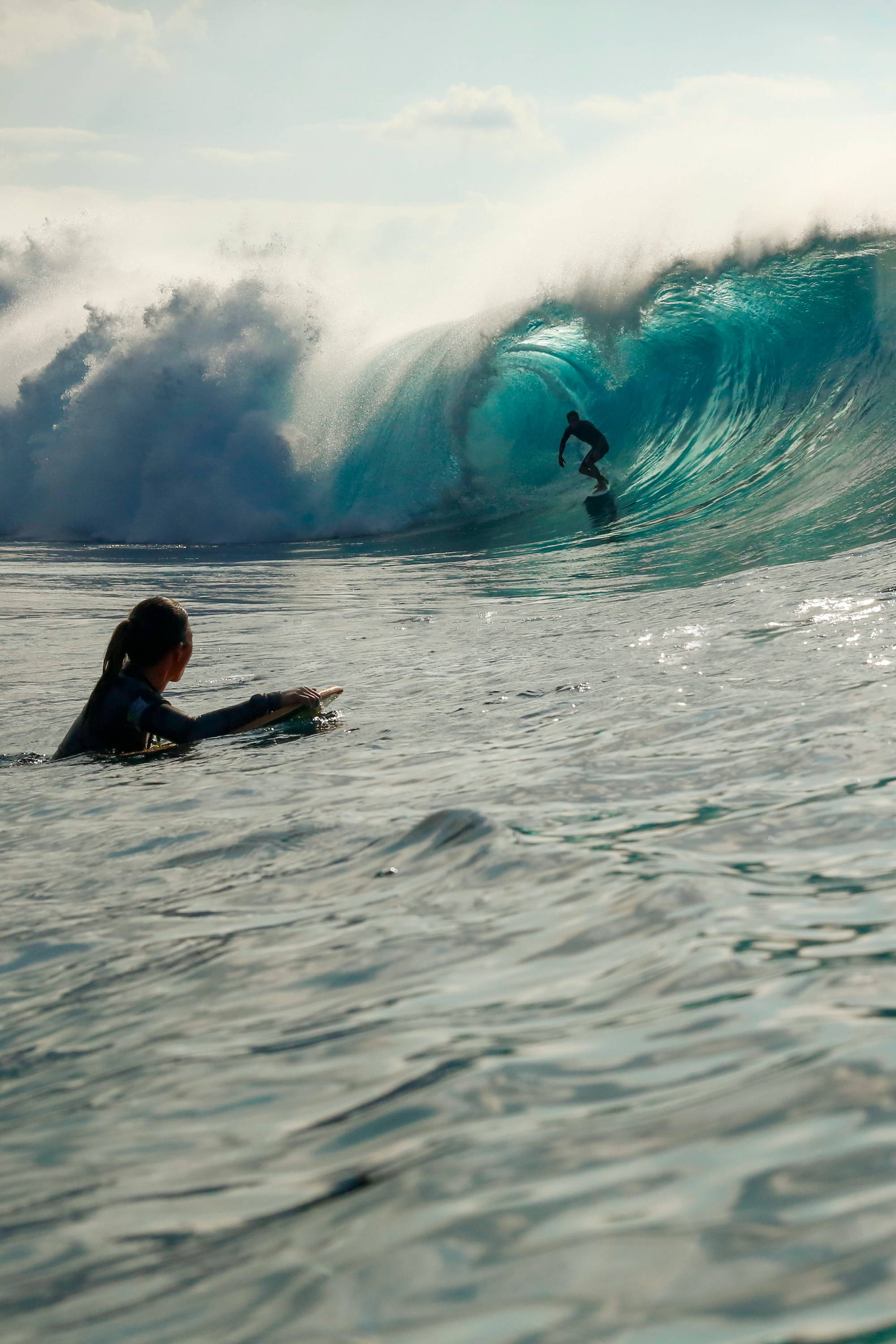 Cut off: When a surfer is riding a wave and another surfer interferes by dropping into the same wave. Cutting people off is highly shunned in a lineup.

Ding: A damaged portion of your surfboard.

Double Up: When two waves converge on one another, generally caused by shifting tides, to create a wave that is even larger. Usually, double ups are difficult to surf and maintain weird characteristics to their face.

Drop In: The act of paddling into a wave and standing up on your surfboard. Can also be the term used to describe the act of cutting someone off, such as “he dropped in on me”.

Digger: A gnarly fall or injury.

Eject: When a surfer jumps off of their surfboard and into the bottom of the wave to try and safely fall.

Face: The open part of the wave that has not yet broken. The face is where most of the radical surfing occurs.

Face Ride: The act of riding either right or left down the open and peeling portion of the wave, parallel to the shore. A face ride is the next step beginner surfers take after learning how to stand up on their surfboard and ride straight.

Fetch: The open area of the ocean where the wind creates the waves.

Firing: When the waves are extremely good and consistent.

The Green Room: Another term to describe being inside the barrel, derived from hue the greenish water. 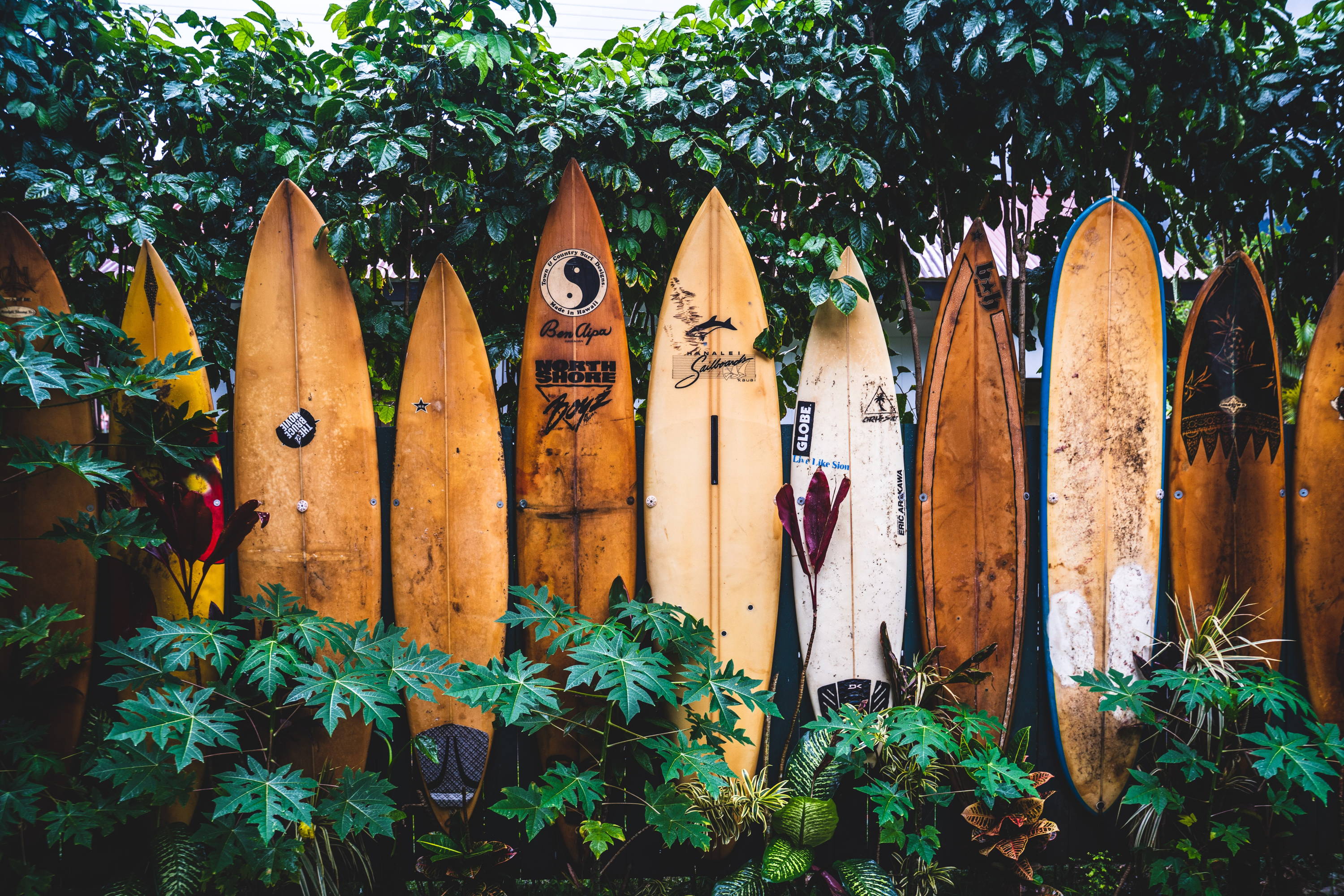 Hang 5: When a surfer riding a longboard stretches one foot to the nose of the surfboard, hanging 5 toes off the edge.

Hang 10: When a surfer walks the deck of a longboard to stand and balance on its nose, hanging all 10 of their toes off the edge of the nose.

Hang Loose: A way to say hello, whats up, or take it easy. A greeting that accompanies a shaka.

Hollow: When the wave conditions are characteristically barreling.

Heavy: A wave that is very big and that has a lot of water within the lip when it breaks. It feels heavy on the surfer and holds them down for a longer period. Another term to describe big and powerful waves.

Impact Zone: The area where all the waves are breaking. This is the portion of water that is all whitewash from broken waves, and surfers have to paddle past the impact zone to make it into the lineup.

Inside: Another term to describe being caught in the impact zone or being too late to make it away from breaking waves.

Kook: A term with negative and derogatory connotation. A kook is someone who thinks they can surf, and who acts like a good surfer, but who is really inexperienced and with little talent.

Layback: When a surfer performs a turn and their body falls back into the breaking portion of the wave. They use the energy of the breaking water to push their bodies back into a standing position on their surfboard to continue riding.

Lip: The upper portion of the wave before it breaks. The lip is where most turns and airs take place.

Lineup: The area of water where the waves are not breaking. This is where the surfers sit together and wait to catch waves.

Local: Someone who lives at or consistently surfs at a particular surf spot.

Localism: When a surf spot is particularly trafficek by locals who do not like outsiders in their lineup.

Lines: The shapes the unbreaking waves make out in the horizon. A lot of lines means that the waves are probably good! 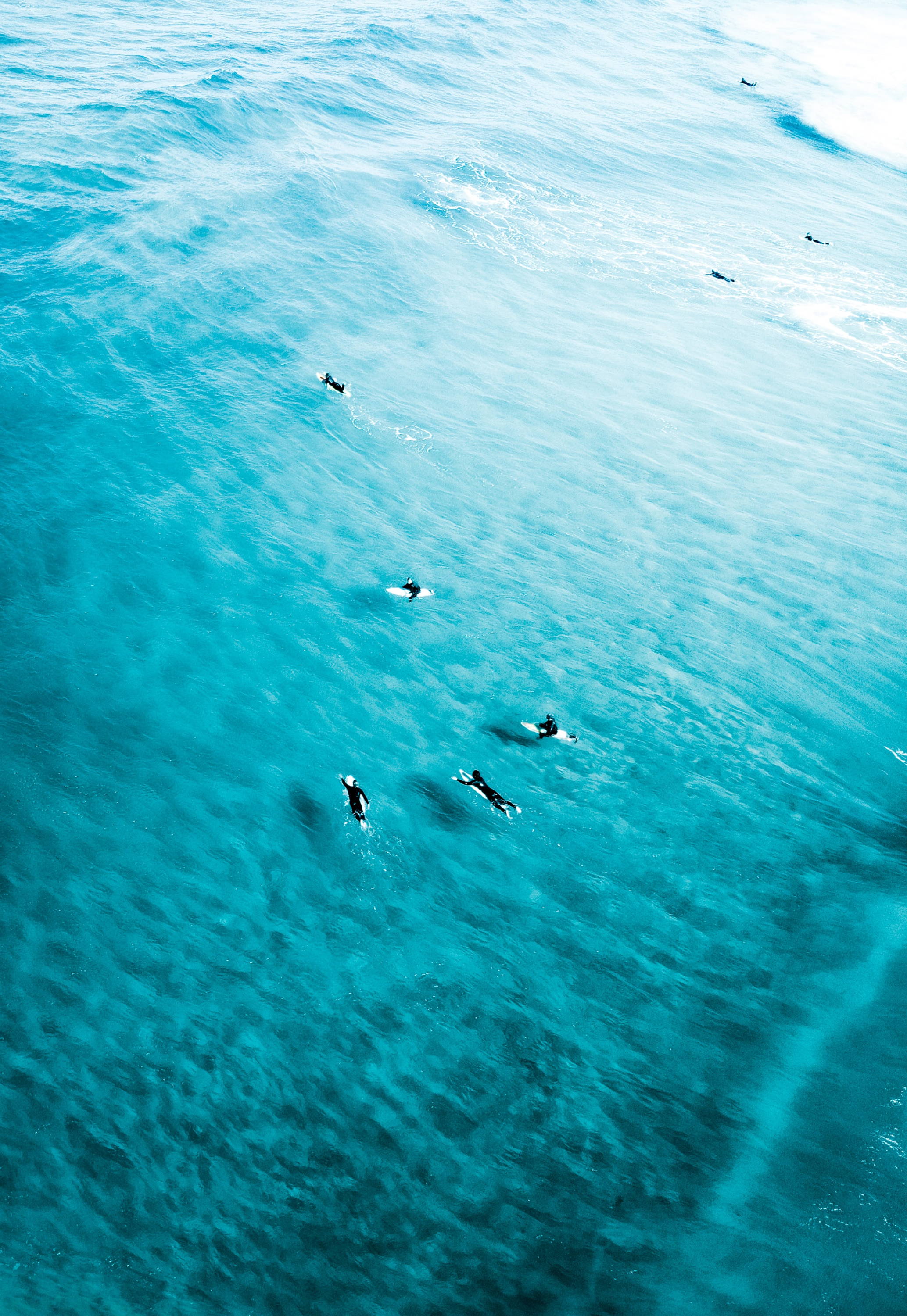 Longboard: The original style of surfboard. Any surfboard that is over 8’7” and that is used to ride small waves with old school style.

Length: The measure of the length of the surfboard.

Lefts: Waves that break to the left.

Maxed out: When the wave conditions are as big as they can get. When a surf spot can not handle the size of the waves and they become too difficult to surf.

Men in Grey Suits: A term used to describe our best friends; sharks!

Mushy: When the waves do not break powerfully. The lip breaks slowly down the face of a wave, usually because the tide is too high.

Noseride: When a surfer stands tall on the nose of their longboard.

Nose: The upper portion of the surfboard.

Offshore: When the winds are blowing against the faces of the wave. Offshore winds are the best kinds of winds for surfing, as they create rippable wave faces and the barreling shapes that you might soon come to love as a beginner surfer!

Outside: The area further out to sea from where the surfers are sitting in the lineup. When a wave breaks on the outside, surfers usually have to paddle frantically to catch it or to get away from it.

Over the Falls: When a surfer falls from the top of the wave to the bottom, crashing under the breaking whitewater as if under a waterfall.

Overhead: When the waves are larger than a standing surfer.

Peeling: When the waves are breaking perfectly in a particular direction. Peeling waves are the best waves to surf.

Peak: The highest point of a wave.

Party Wave: A wave where multiple surfers ride together in an enjoyable and fun manner.

Pitted: When a surfer becomes barreled.

Pocket: The portion of a wave where the power is contained.

Point Break: A type of wave that breaks off of a point on the land and that only breaks in one direction.

Pumping: When the waves are good or have been good for a long time.

Quiver: A surfers collection of surfboards.

Radical: Surf maneuvers that are extreme and that push the limits of surfing.

Rails: The edges of your surfboard.

Rights: Waves that break to the right.

Rocker: The amount of curve under a surfboard that is most defined under the nose.

Set: The bigger waves that are rideable during a session.

Shaka: The hand gestures surfers you as a way to show stoke or with their greetings.

Shoulder: The outside, softer, and less powerful portion of a wave.

Tow in: When a surfer must be towed into a wave behind a jetski because of the size of the waves.

Twin Fin: A surfboard that has only two fins that are exactly the same.

Wax: The material used to add grip to a surfboard.